What is panchromatic sharpening? 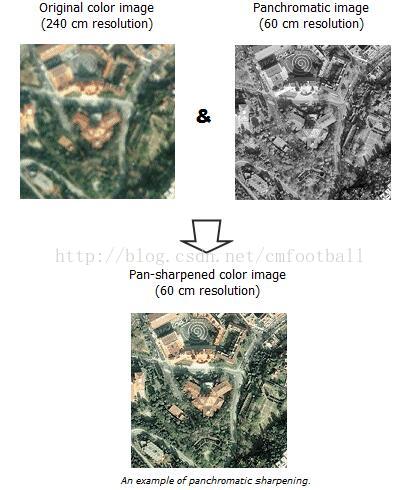 ArcGIS provides five image fusion methods from which to choose to create the pan-sharpened image: the Brovey transformation, the intensity-hue-saturation (IHS) transformation, theEsri pan-sharpening transformation, the simple mean transformation, and the Gram-Schmidt spectral sharpening method. Each of these methods uses different models to improve the spatial resolution while maintaining the color, and some are adjusted to include a weighting so that a fourth band can be included (such as the near-infrared band available in many multispectral image sources). By adding the weighting and enabling the infrared component, the visual quality in the output colors is improved.

The Brovey transformation is based on spectral modeling and was developed to increase the visual contrast in the high and low ends of the data's histogram. It uses a method that multiplies each resampled, multispectral pixel by the ratio of the corresponding panchromatic pixel intensity to the sum of all the multispectral intensities. It assumes that the spectral range spanned by the panchromatic image is the same as that covered by the multispectral channels.

However, by using weights and the near-infrared band (when available), the adjusted equation for each band becomes

where the inputs are

The Esri pan-sharpening transformation uses a weighted average and the additional near-infrared band (optional) to create its pan-sharpened output bands. The result of the weighted average is used to create an adjustment value (ADJ) that is then used in calculating the output values. For example:

The Gram-Schmidt pan-sharpening method is based on a general algorithm for vector orthogonalization—the Gram-Schmidt orthogonalization. This algorithm takes in vectors (for example, 3 vectors in 3D space) that are not orthogonal, then rotates them so that they are orthogonal afterward. In the case of images, each band (panchromatic, red, green, blue, and infrared) corresponds to one high-dimensional vector (#dimensions = #pixels).

The details for this technique are described in the following patent:

The IHS transformation is a transformation of RGB and intensity, hue, and saturation. Each coordinate is represented by a 3D coordinate position within the color cube. Pixels having equal components of red, green, and blue are on the gray line, a line from the cube to the opposite corner (Lillesand and Kiefer 2000). Hue is the actual color; it describes the shade of the color and where that color is found in the color spectrum. Blue, orange, red, and brown are words that describe hue. Saturation describes the value of lightness (or whiteness) measured in percent from 0 to 100 percent. For example, when mixing red with a saturation of 0 percent, it will be as red as it can be. As the saturation percentage increases, more white is added and the red will change to pink. If the saturation is 100 percent, the hue is meaningless (essentially, red loses its color and turns to white). Intensity describes a value of brightness based on the amount of light emanating from the color. A dark red has less intensity than a bright red. If the intensity is 0 percent, the hue and saturation are meaningless (essentially, the color is lost and becomes black).

The IHS transformation converts the color image from an RGB color model to an IHS color model. It replaces the intensity values with those obtained from the panchromatic image being used to sharpen the image; a weighting value; and the value from an optional, near-infrared band. The resultant image is output using the RGB color mode. The equation used to derive the altered intensity value is as follows:

The simple mean transformation method applies a simple mean averaging equation to each of the output band combinations. For example:

To apply the panchromatic sharpening technique to a multiband raster dataset in ArcMap,use the RGB Composite renderer on the Symbology tab or use thePan-sharpen button on the Image Analysis window.

Applying pan-sharpening to a raster layer in ArcMap

Using the Pan-sharpen button on the Image Analysis window